Lesbian Bed Death is a UK based band best described as Gothic Punk meets Hard Rock with a theme of Horror running throughout. If you would like to know more, you've certainly come to the right place.

Lesbian Bed Death was founded by guitarist Mr Peach as a side project designed to pay tribute to all of the Gothic Punk, Glam, Sleaze bands he grew up with, as well as his love of Horror movies. The name of the band came from a documentary he saw on television one night, when a psychologist was explaining the theory of 'Lesbian Bed Death'. To him, it sounded like a cool name for a Gothic Punk band. It was over the top, larger than life, and a little ridiculous. It was also a name that no-one would forget in a hurry.

He was soon joined by Johnny Hell (Vox/Guitar/Keys/Programming) and in 2004, Lesbian Bed Death became a reality when the duo recorded their first song 'Goth Girls Are Easy'. It was recorded in Johnny's flat in London on his home computer, then was put on the internet for free download. The MP3 of the song was downloaded worldwide and was picked up by several Goth DJs who gave it plenty of rotation. The original version of Goth Girls Are Easy can be heard HERE.
The Duo soon became a trio with the addition of Magic Andy on Bass. A few more demos were recorded and Lesbian Bed Death performed a string of live shows, with the rest of the band being made up of various musician friends from their local scene. The live band members varied, depending on who was available to play at the time. Unfortunately things didn't work out with Johnny Hell, mainly due to his other commitments and the distance between band members.

The only recording from Lesbian Bed Death with Johnny Hell on vocals that received an official release was 'Goth Girls Are Easy' which was featured on the compilation album 'Kill Your Management Volume 6'. 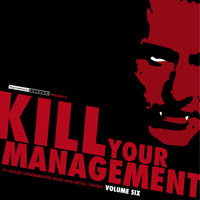 Despite not having a lead singer, Lesbian Bed Death started recording their debut album with producer Alex Jockel at The Lizard Lounge in Stoke-on-Trent. At this point, they had six songs written, and three more in their early stages. They put an advert out for a lead vocalist on MySpace, and a singer from Runcorn by the name of Leanne Allister responded. She came to the studio to audition, and the band were so impressed with her soulful, powerful voice that they used her audition vocals (the song Filth) on the final version of the record. Leanne became Luci4, and the band finally started to shape itself into what it is today.

Lesbian Bed Death finished recording their existing songs and wrote a few new ones too. Their debut album I Use My Powers For Evil was released on in 2006.

For more information on I Use My Powers For Evil, click HERE.

The debut album was followed by three music videos (Goth Girls Are Easy [2006], I Use My Powers For Evil [2007] and Pretty But Mental [2008]) and gigs all over the UK, including some underground festivals. The band also played shows in The Netherlands. Slowly, Lesbian Bed Death started to build up a cult following with their own brand of Gothic Sleaze and Horror themed music videos, and went on to sell albums all over the world. People searching YouTube for 'Lesbian' and 'Goth Girls' at the time certainly didn't hurt when it came to getting views.


Lesbian Bed Death began working on a new album in the Summer of 2009, with live lead guitarist Chuckmaster C now a permanent band member. However, nothing is ever easy with LBD. On the first day of recording, Magic Andy quit the band. The remaining members recorded almost the entire album over the next few weeks, hoping that he would reconsider and rejoin the band. Eventually, Chuckmaster C had to record the bass parts.

Unlike the debut album which featured a host of guest musicians, the second album was recorded by just four people: Luci4, Mr Peach, Chuckmaster C, and long-standing live drummer Danny Stigmata. Soon after the recording of the album, the band recruited bassist Will Power to complete the line-up. Lesbian Bed Death had now become more of a real band as opposed to a 'project'. 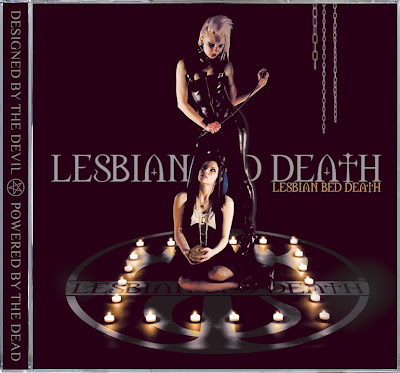 In a long standing tradition of utter chaos, Lesbian Bed Death announced the departure of lead singer Luci4 only weeks before the Halloween 2010 release of the album.

The band found Kittie Racchea and she became the new lead singer. Naturally, touring an album when the lead singer didn't sing on it caused some confusion. For this reason, the band re-recorded Moonlight and Designed By The Devil, Powered By The Dead, and released them as a digital single (Click HERE for more info). They then released a music video for Moonlight in April 2011, unleashing this new version of Lesbian Bed Death into the world.

In the summer of 2011, the band recorded five new songs at MCC Studios in Manchester, including the song Halloween. They released a music video for Halloween in time for (surprise!) Halloween to get a buzz going for the next record. They used the crowdfunding platform PledgeMusic to raise funds to record more songs in January 2012. The campaign was a success and the album Riot Of The Living Dead was released on 25th June. 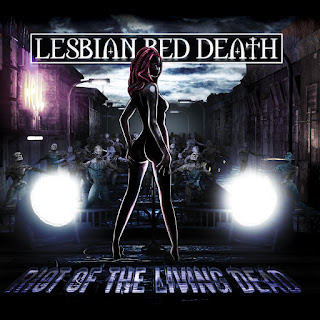 For more info on Riot Of The Living Dead, click HERE.

After a number of live shows, Will Power and Danny Stigmata left the band. Lesbian Bed Death were now a trio again. Unable to tour, they started work on new material and recorded The Devil's Bounty Hunters during the summer of 2013 with lead guitarist Chuckmaster C playing drums and bass too. It was recorded at the legendary Chapel Studios in Lincolnshire. 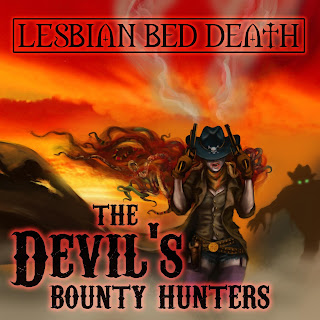 For more information on The Devil's Bounty Hunters, click HERE.

Soon after the album was finished, Will Power re-joined the band and Simon Whitney, who had been an occasional live drummer for Lesbian Bed Death a few years before, stepped in to complete the new gigging line-up. This line-up also filmed music videos for the songs Broken and Dark Passenger.


The band played a number of shows to promote The Devil's Bounty Hunters, and this run of gigs ended with a slot at the world famous Whitby Goth Weekend on 1st November 2014. It was the biggest gig Lesbian Bed Death had played, and it also ended up being this line-up's last. 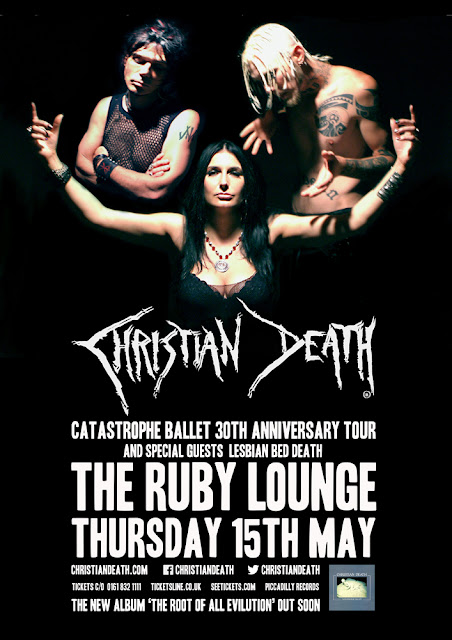 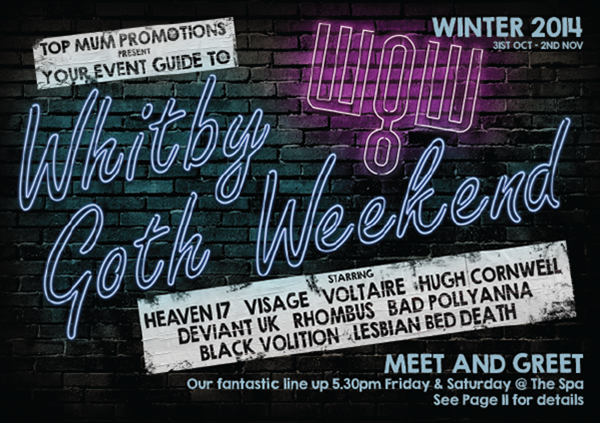 Shortly after this show, Chuckmaster C left the band. He was replaced by lead guitarist Vik Voodoo, who played on several tracks on the debut album 'I Use My Powers For Evil' (under his real name). By this time Will Power had quit again and Simon stepped down to concentrate on his own band.

A few months later, Kittie Racchea quit as she no longer wanted to tour and felt that she had taken Lesbian Bed Death as far as she could. Mr Peach decided to keep the band going and look for a new lead singer. A nationwide search commenced, and in October 2015, Sienna Venom was announced as her replacement.


This new line-up started recording a brand new album in 2016 called 'Evil Never Dies'. The drums were recorded by Russ Gwynne who also played on the debut album. Shortly after the album's completion, the band announced Aaron Samedi as the new permanent drummer, and a video for the song Evil Never Dies was released on 29th April 2016. The full album was released on 23rd September 2016. 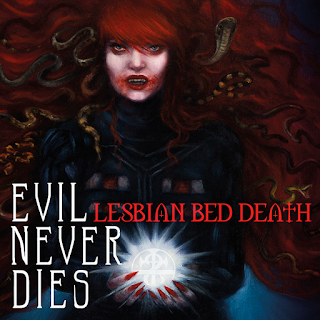 Lesbian Bed Death went on to play shows around the UK to promote the new album. They also released music videos for Son Of A Thousand Maniacs and Satan In The Swamps. The latter was filmed, directed, and edited by guitarist Mr Peach. 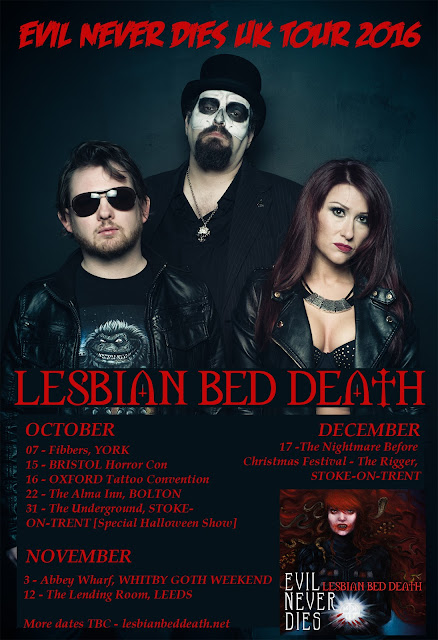 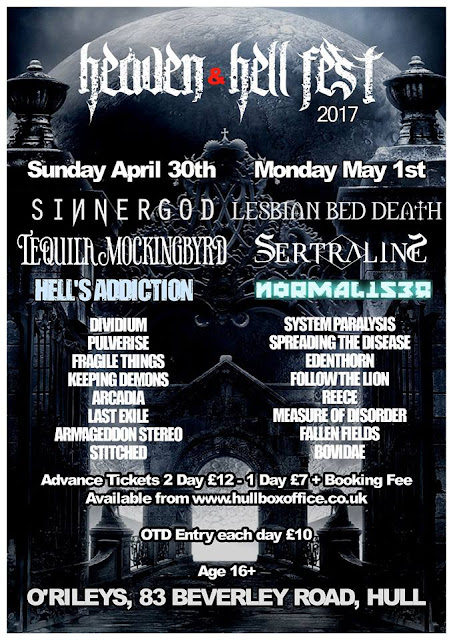 The summer of 2017 saw the departure of lead guitarist Vik Voodoo. John 'Doctor Powerful' Caci from the band Betrayal Incorporated stepped in as a temporary replacement. This line-up played several shows in the UK and Spain, recorded a song for the Horror movie Clownface (Video Nasty), and embarked on a full UK tour supporting The Birthday Massacre. John played all but the last date on that tour. For the last show, Dani J Rankin stepped in as our lead guitarist and became a permanent member of the band after we played. John returned to be in the music video for Video Nasty.

In the summer of 2018, Lesbian Bed Death parted ways with Sienna Venom. They held auditions and soon announced Adele De'Ath as the new singer. They introduced her with a Horror short (click here to see it) which featured a snippet of a new song called Fury. A music video was released for Fury in January 2019. The band was planning their next album and also played a few shows, including support slots with Hands Off Gretel and a second gig with ex-Misfits singer Michale Graves.

Also, at the start of 2019, our drummer Aaron Samedi revealed that he was actually a she; a transgender woman. She changed her name to Aimee Violet and played her first show as Aimee at the Girls Rock! Festival in Stoke-on-Trent. The band is delighted to acknowledge how supportive the fans have been! 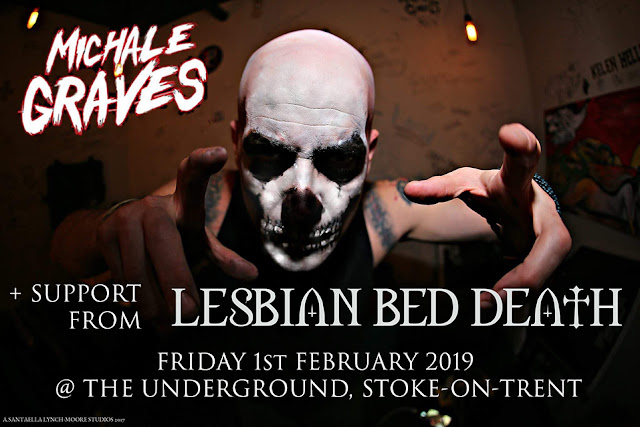 Unfortunately, musical differences began to surface in regards to new material. It was apparent that Lesbian Bed Death was not the right band for Adele De'Ath and she quit in April 2019 a few days before a run of gigs, starting with a local show at The Underground in Stoke-on-Trent.

Determined to try and save the shows, Mr Peach reached out to Luci4 who he hadn't spoken to in nine years. They worked things out and Luci4 was back onstage with Lesbian Bed Death three days later. All of the shows were saved, and the band continued work on their new album Born To Die On VHS with Luci4 back as the lead singer.


Despite numerous setbacks including the departure of lead guitarist Dani J Rankin, Lesbian Bed Death finally released their sixth studio album, Born To Die On VHS, on 27th September 2019. Unlike their previous records, this one was an album of mostly cover versions of songs from Horror movies, hand-picked by founder-member and rhythm guitarist Mr Peach. In addition to the covers, the album featured three original songs including a version of Fury with Luci4 on vocals. The other two new songs, Flesh and Born To Die On VHS, featured a guest appearance from their friend Steve Lethal on lead guitar. 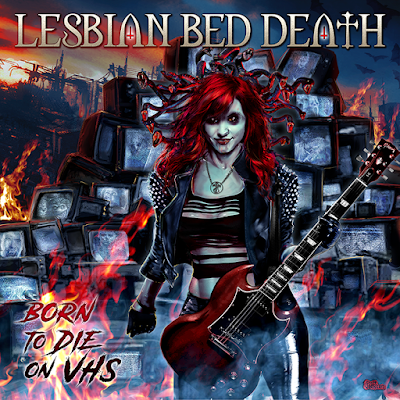 The band played several shows to promote the new album as a three-piece, including  slots at Aonia Fest III in Sheffield and Goth City, Leeds. 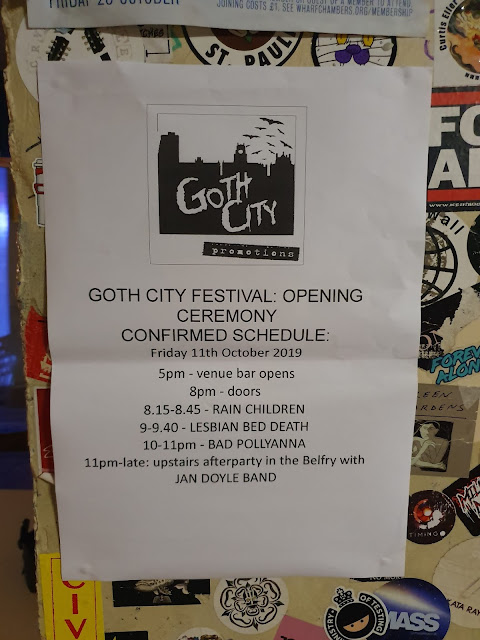 The start of 2020 saw the band release a music video for Born To Die On VHS, re-mixed by Steve Lethal.

The band continued to play shows to promote the 'Born To Die On VHS' album, including a sold out show at Carpe Noctum in Leeds, supporting the Goth legends, Skeletal Family. 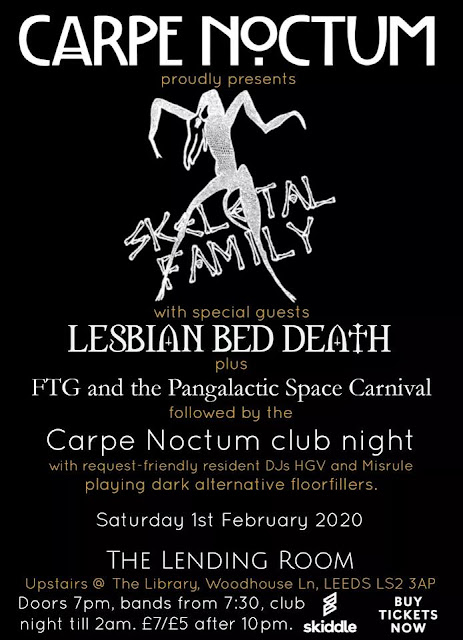 From March 2020, due to the coronavirus pandemic, the band had to cancel all live shows. However, they managed to film and release a music video for Flesh (click here), and continued to write songs for a brand new album, with Steve Lethal stepping in as lead guitarist and producer. Original bassist, Magic Andy, briefly re-joined the band, appearing in the Flesh video and contributing writing to a couple of new songs, but decided to leave again before Christmas.

The chaos never seems to stop in Lesbian Bed Death. Due to the same issues that had challenged the band the first time, and despite their best efforts to make things work, it was clear that it would not be possible to continue with Luci4 on lead vocals (click for post). 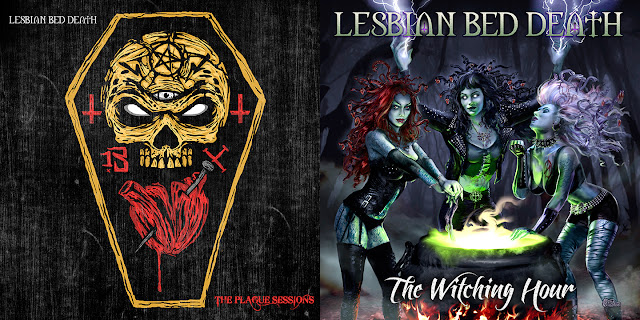 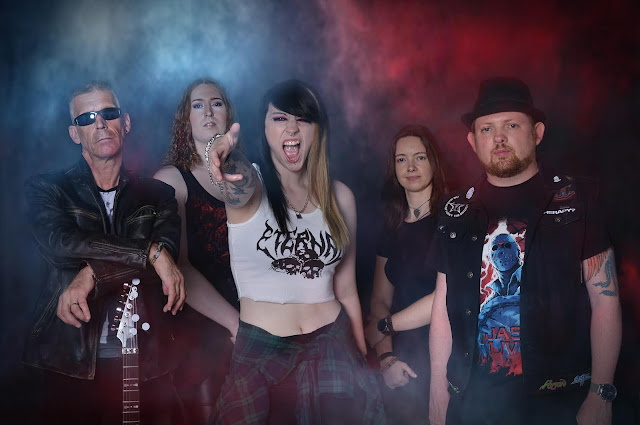